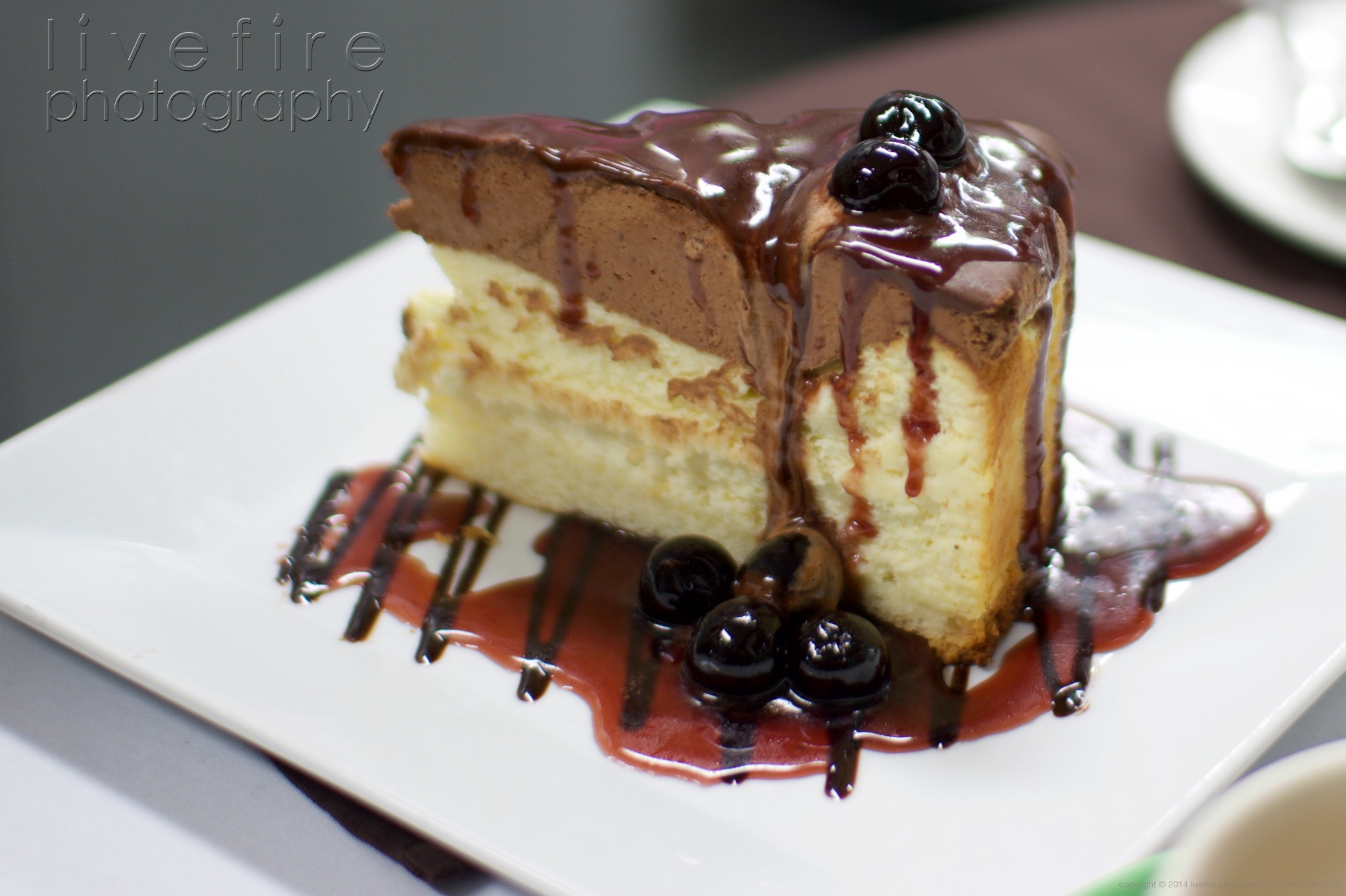 I grew up in New Carlisle, Ohio. It’s a small town north of Dayton, around 6500 people. One of the things I like about the area around Dayton is there are lots of small towns that stand apart and aren’t suburbs. They have history, a sense of community; you’ll see people without kids in school still going to high school football and basketball games. We live outside an even smaller town now, called Waynesville, with an even older history.

Another town, just seven miles or so west of New Carlisle, is Tipp City. The town was founded in 1840, so it’s not quite as old as other towns around, and its population is about 9800. What makes it a bit different from New Carlisle or Waynesville is that it’s right along a major interstate highway, so part of the town is built up a bit more, with fast food restaurants mainly. New Carlisle, for instance, only has one chain restaurant, which is a Domino’s Pizza. What’s great about Tipp City, however, and a lot of the small towns in Ohio seem to share this, is that it’s got a great historic area of gorgeous, old homes, as well as at least a couple blocks of storefronts. They also typically have free, easy access parking, 2 lane streets and few traffic lights. Tipp City also has a few really great shops and a couple of restaurants.

Back in 1994, a small restaurant opened called Coldwater Cafe. My mom and I tried it one day after they opened, and, while the food was good, it as a bit much for the small town, I thought, just a bit snooty. I think small town restaurants can be great, but they have to still act small town. They can serve the most gourmet food, but they have to make people welcome. In my opinion, Coldwater Cafe, in 1994, did not do that.

Before I go on, I want to say this isn’t really a restaurant review. It’s just a relaying of an evening spent with friends, that happened to be at Coldwater Cafe. And, since it’s been 20 years since I want there, I was willing to try it. The restaurant have moved to a larger location, still in the older downtown Tipp City. I will say, though, that my opinion of the 2015 Coldwater Cafe is 180 degrees from my 1994 opinion. Where there was a sense of pretentiousness before. that was replaced with fun and enjoying what they do at the restaurant. There’s a feel of small town there, but it’s in the friendliness of the staff, not in their lack of ability to put out a great dinner. With that, I’ll say upfront that, if you’re in the area north of Dayton, Ohio, Coldwater Cafe is a place you should try, and more than once. By the way, there are lots of photos ahead, too.

Friends of ours invited us to join them for something I’d wanted to do for some time; they wanted us to have dinner at the Chef’s Table. This isn’t that common in small-town Ohio; it’s a chance to have a chef’s choice dinner of several courses, usually with paired wines, at a table set up in a corner of the kitchen. Some have the table built-in, some don’t. The table where we ate was tucked into a corner near the back of the kitchen, and was obviously not a permanent table. To me, that made it even a bit more fun. However, nothing was missing for us to have a great time. 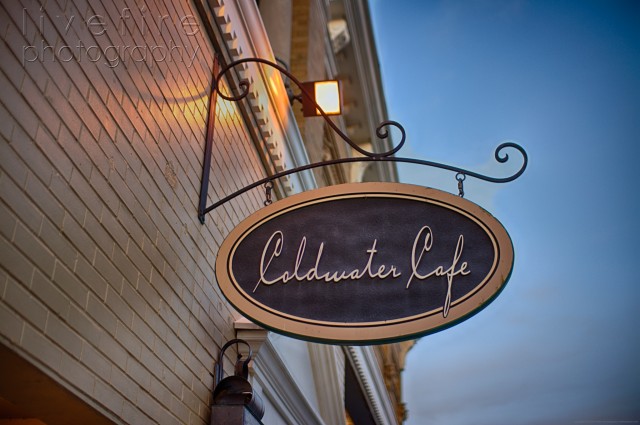 We parked, with no meter or parking fee, about 60 feet from the door, walking by a cool toy store and tiny candy/cupcake shop. The signage is simple but nicely done. I wish now I’d taken some shots of their lobby and bar area. There are inviting chairs and seating, with a fireplace and small bar. Khaki and brown are the predominant colors throughout the restaurant, with nicely done booths and tables, none of which are seen from the entry, which I thought was nice. 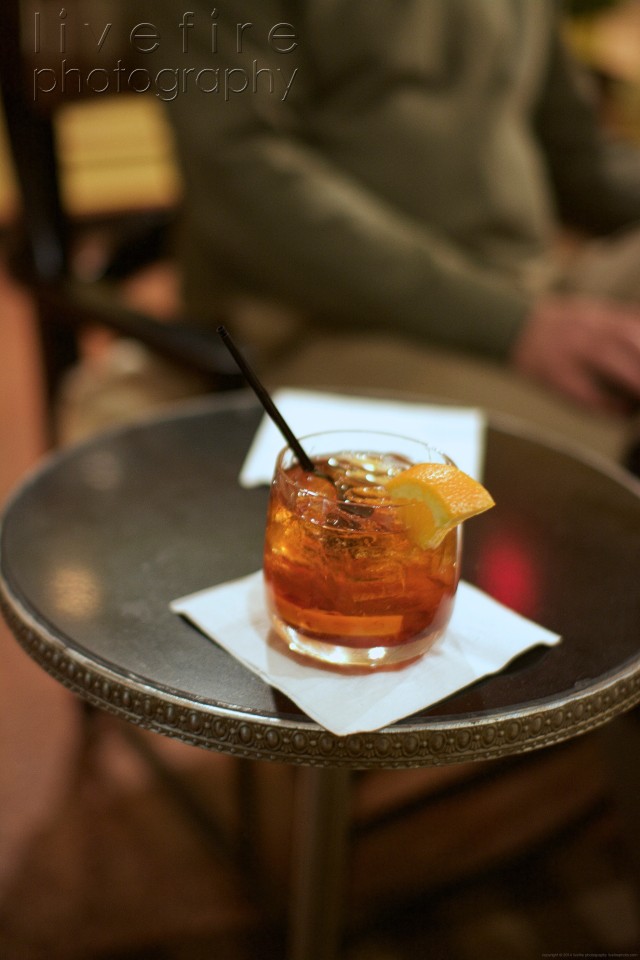 Before heading back to the kitchen, I had an Old Fashioned. It was nicely made, not too sweet. It was great to sit next to a fire and talk for a bit with friends. The staff greeted several other customers, and it was obvious that a lot of people become regulars. The decor was Early American, but not primitive. The place is really tastefully done. If there was a place like this close to home, I’d be likely to stop just about any Friday evening on the way home to meet my wife and friends for a drink to start off the weekend. 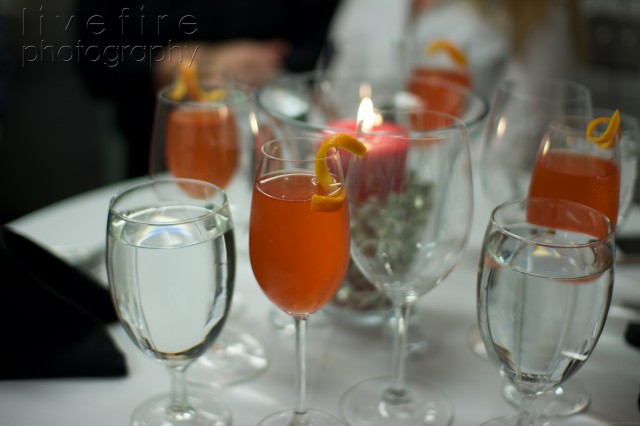 While getting ready to head back to the kitchen, we met Damian, the wine steward. We walked back to the kitchen table to find aperitifs already waiting. They were a mixture that Damian had mixed up for us, with sweet as well as a bitterness that did what an aperitif is supposed to do, stimulate the appetite. Would I ask for this again? Well, it doesn’t yet have a name, so it would be hard to order again, but I would with one exception, and this is just my preference: there was a bit of Sprite in the drink that I would ask to not have, but I just generally don’t care for pop (which is what we call it here in Ohio). With that said, though, I still enjoyed the whole thing. 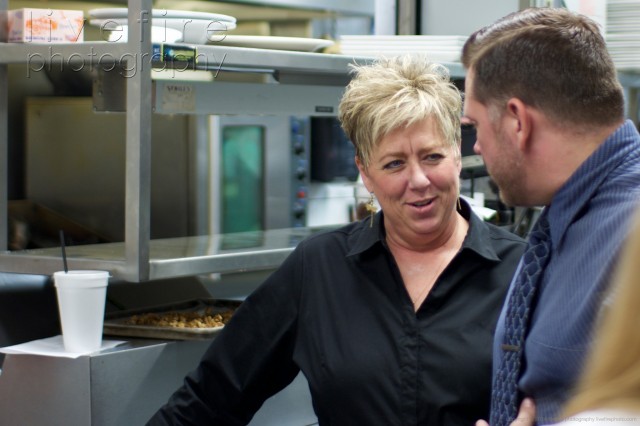 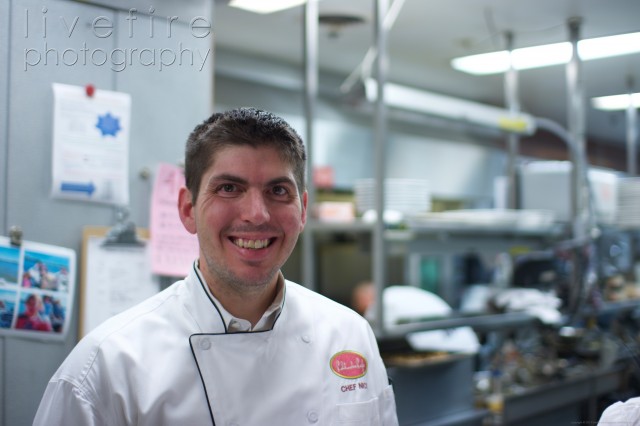 We met Chef Nick, as well as Kelly, our server for the evening. We had time throughout to talk to each of them a bit, and it’s great to be welcomed into a chef’s kitchen like this. You get to see things like the Christopher Walken Cooler. 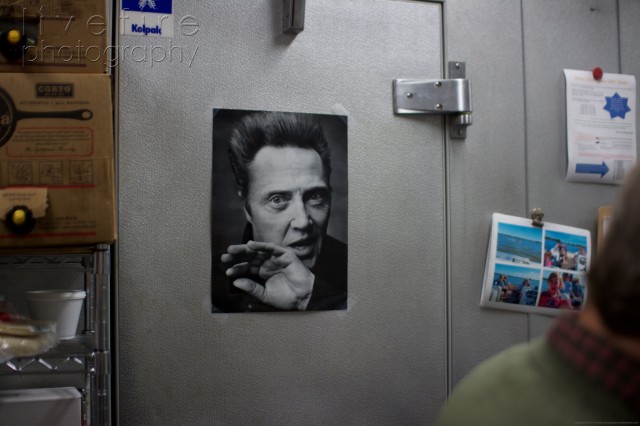 After meeting the staff and looking around a bit, we were served an amuse bouche. It was a great bit of mussels in a Thai curry sauce… not too hot, but a touch of heat. This is now on their regular menu, and a big bowl of these would be great! 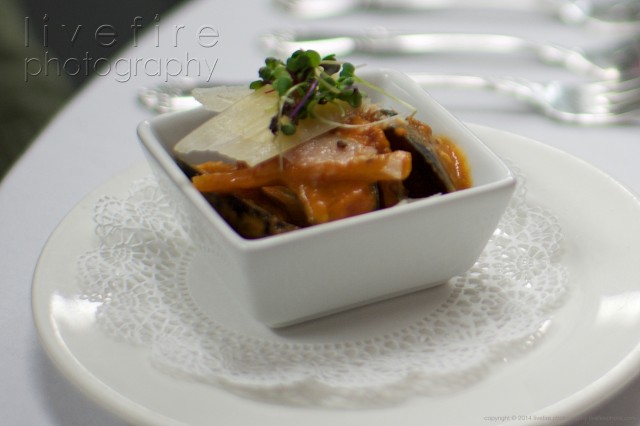 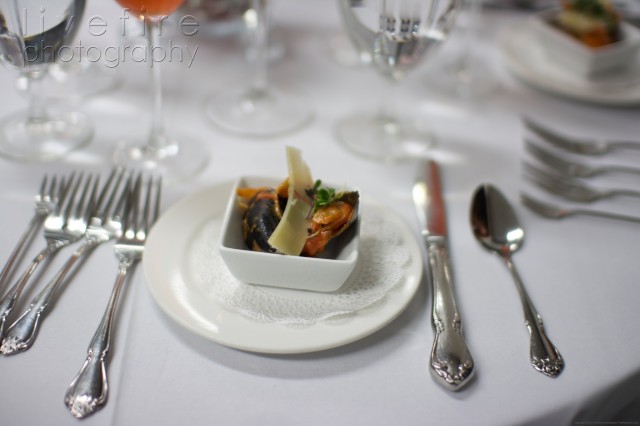 Our friends were a bit leery of the appetizer; they lived in Maryland for eight years, and, once you’ve had good crab cakes, it’s tough to have lesser ones. The app consisted on some micrograms with lobster and crab cakes. They were seared nicely, and had a great remoulade. These passed their judgement very nicely. I’d like a larger one as a crab cake slider! Damian paired this with a 2012 Kendall-Jackson Vintner’s Reserve Chardonnay, which worked really well with the dish. 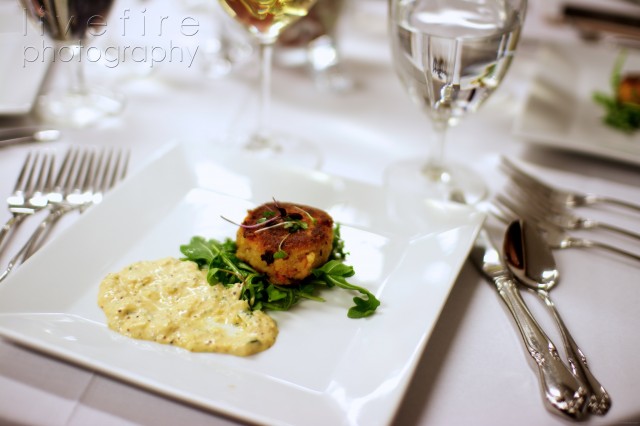 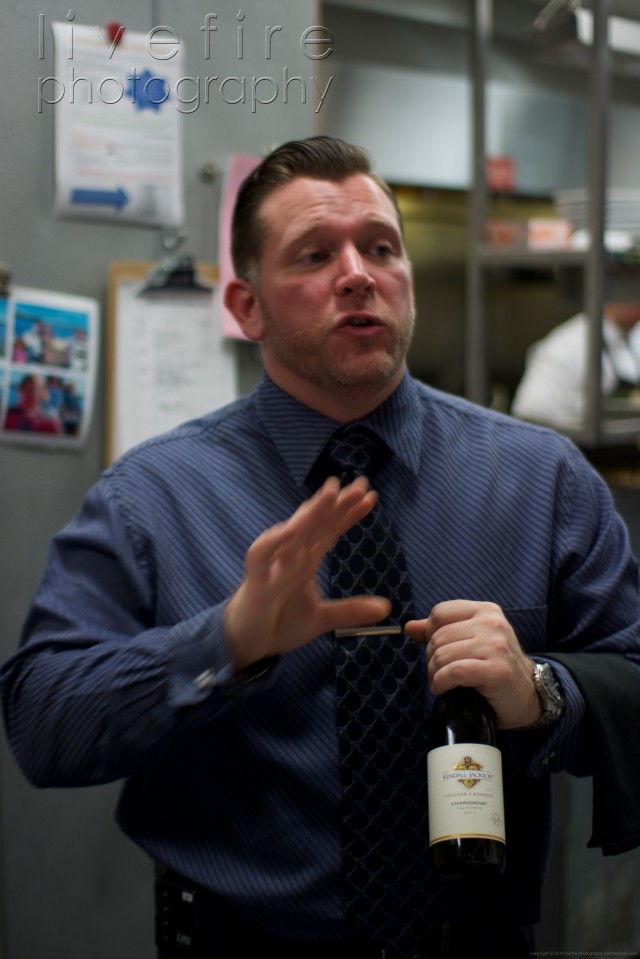 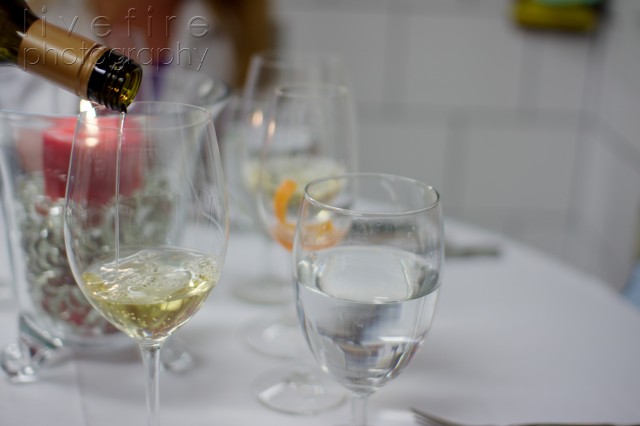 After the lobster and crab cakes, we moved on to the salad. This was a very fresh spinach salad with a bleu cheese and candied walnuts and strawberries. It was light and really refreshing! It was paired with a great Moet Chandon wine, a 2012 Carneros Pinot Meunier. This wasn’t a typical California wine to me; it was soft, subtle and would go well with almost anything, I think. This was a great choice for the salad, too. This was followed by a strawberry sorbet palate cleanser 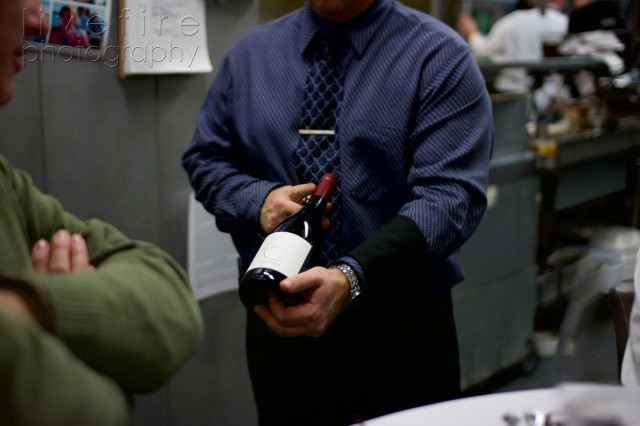 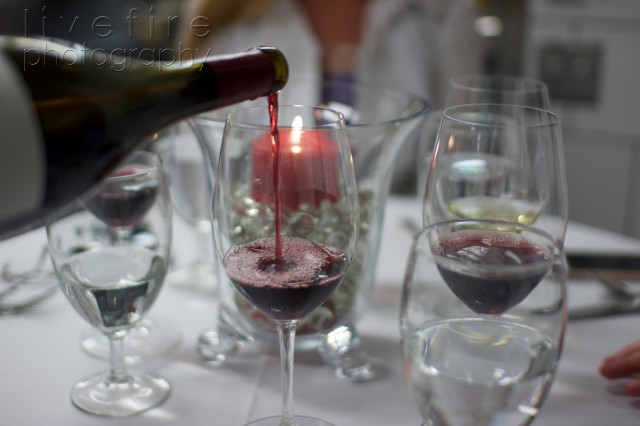 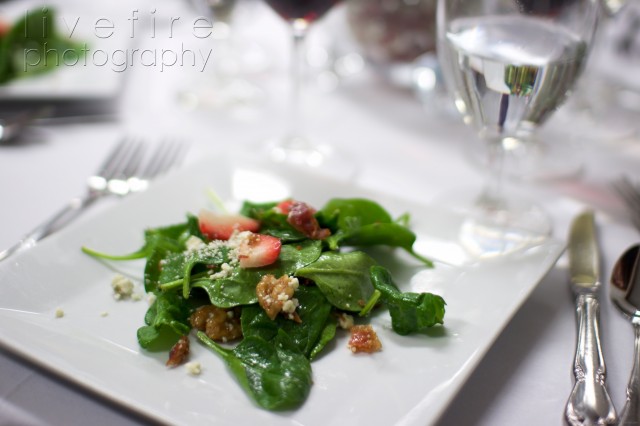 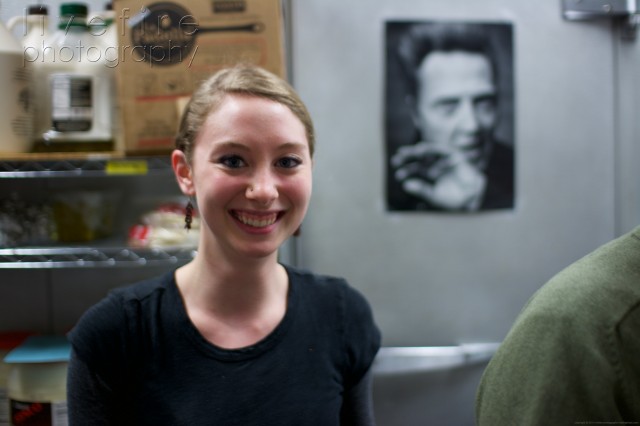 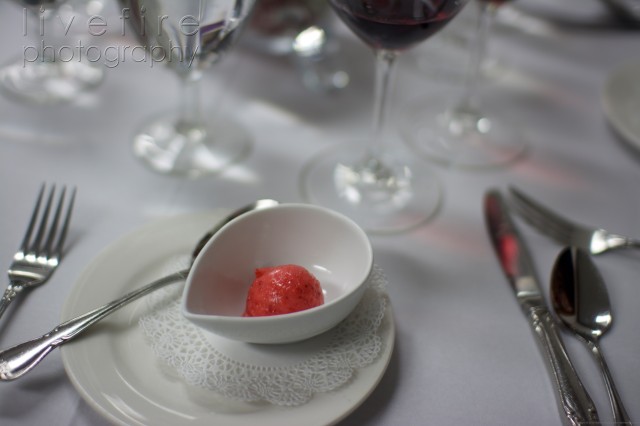 Next up was the fish course. The course was yellowtail snapper with fresh asparagus, hollandaise and grits from South Carolina that Chef Nick had found on a trip south. They were coarse ground enough that the dish was almost like creamed corn with less liquid. These were some of the best grits ever, with no cheese or other cover-up flavors, just great grits! The whole dish was great. The snapper had crispy skin, the hollandaise was light, and I think everyone ate the whole thing, and at least one of us considered licking the dish. It was paired with a Spanish white. Now, if you’re a regular, you may remember a few wine parties ago that we did white and red Spanish wines. No one liked the whites. Our opinion is very different now! This had nice mineral hints and was great with the fish. 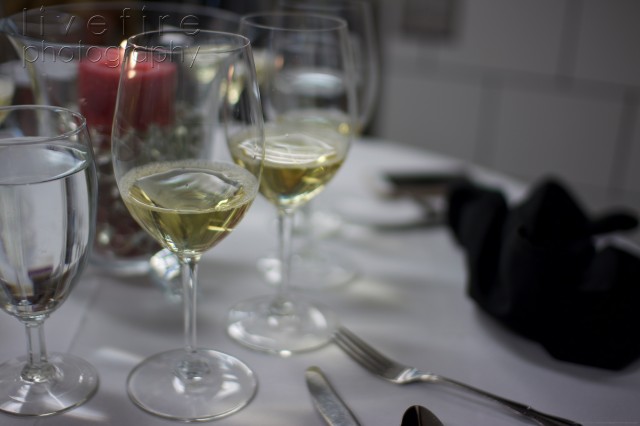 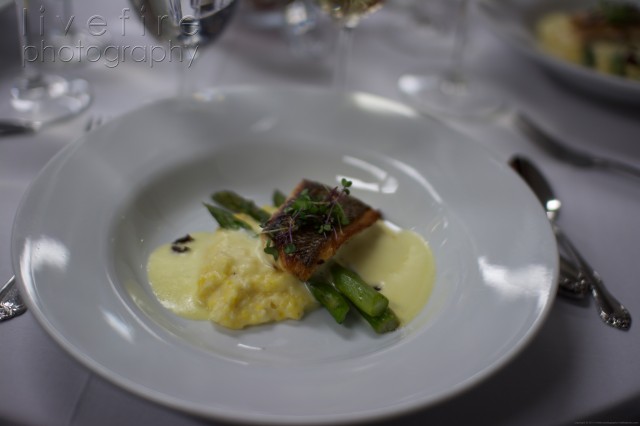 I would have been happy with the fish being the main course, but that wasn’t the case… The mains were pork tenderloin with a quince paste, along with a great mash of root veggies (parsnip, carrot, sweet potato, white potato) topped with some very crispy pork fat. The Brussel sprouts were very nicely browned and delicious! The wine was a really great French red, a 2011 Domaine Bila Haute L’esquerda. This was the biggest of the reds we had, a mix of Syrah, Grenache and Carignan grapes, with some slate, mineral, smoke but also some lighter herby flavors. I could have gone for another bottle of this stuff! 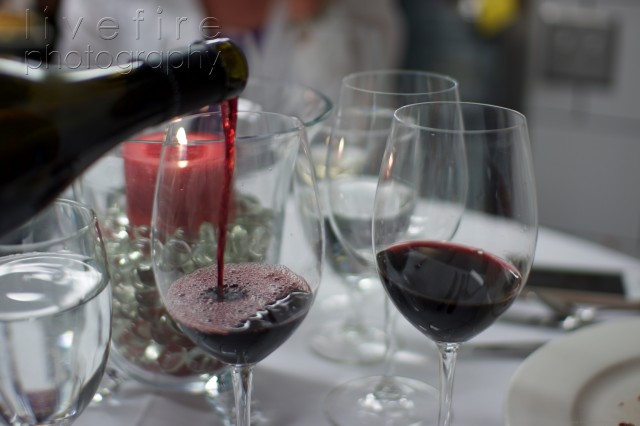 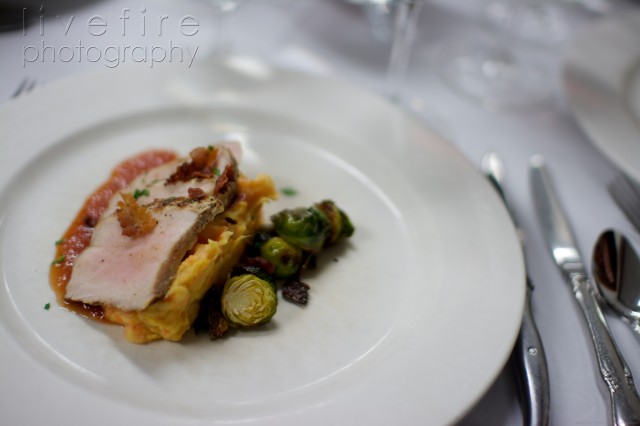 We took a bit of a break here and there, and I wandered around the kitchen. I have to apologize that I don’t remember everyone’s name, but I hope to get back to the cafe to remedy that. 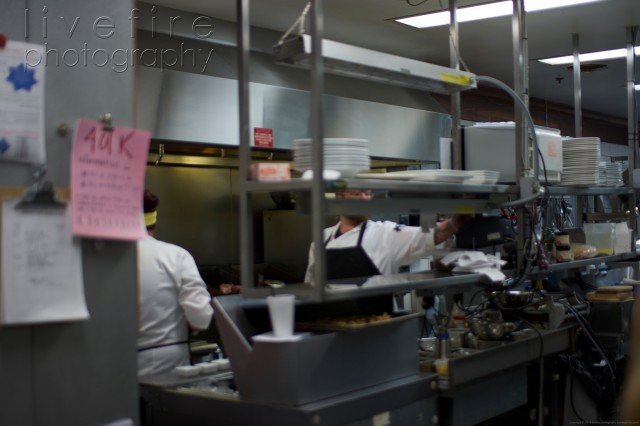 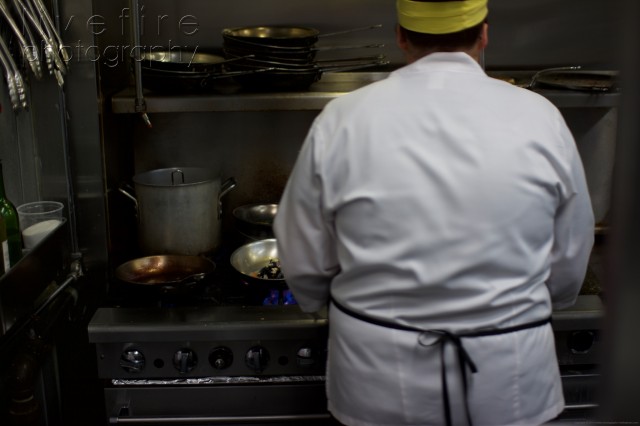 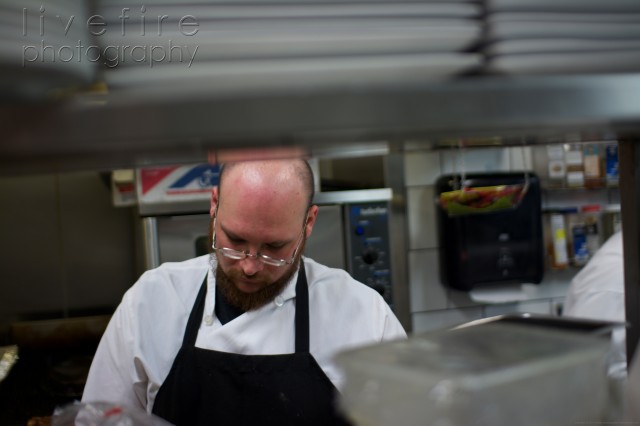 Then we were on to dessert and coffee! Damian gets a coffee in from Traverse City, MI, and served it in a French press. I don’t do caffeine anymore, but I did try it, and it was an excellent coffee. We also were served a glass of Sauternes and a glass of a lighter, sweet red. The desserts were a wine-parfait, which was very sweet, served in a cocktail glass, a really interesting gorgonzola ice cream, paired with the Sauternes, and a cheese cake made with white and regular chocolate mousses, with a liqueur-flambéed cherry sauce (the cherries were Luxardo cherries, the original maraschino cherries from Italy). I don’t typically like chocolate and fruit, so I tried them separately and loved them. The sauce was good on the cheesecake. All in all, a fun set of desserts, with Damian doing the flambé table-side! 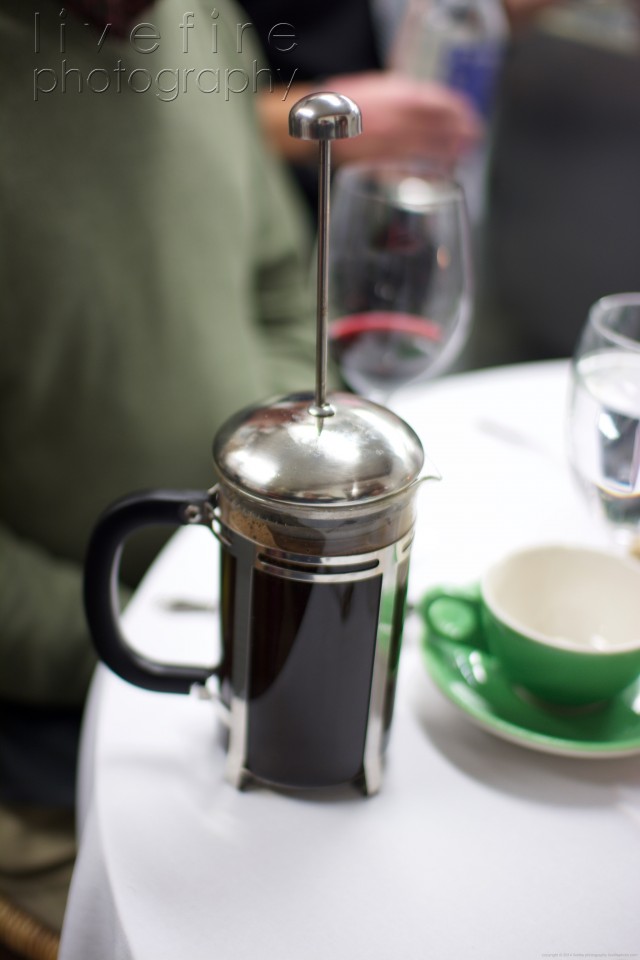 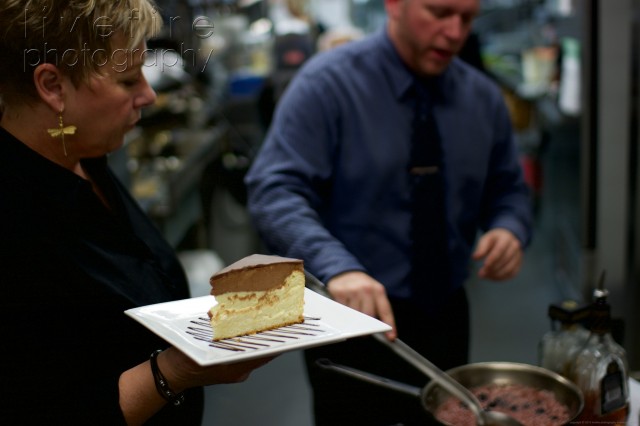 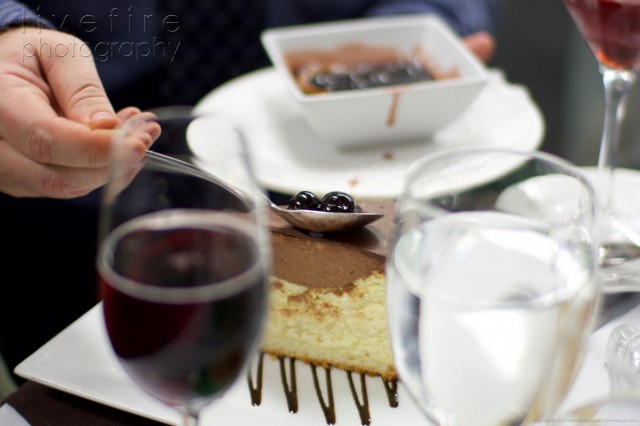 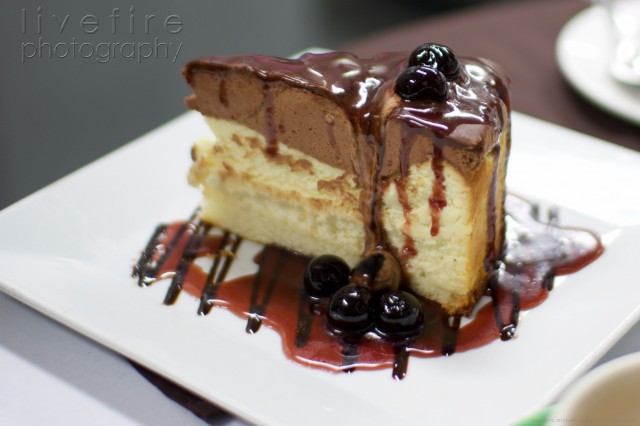 If you get the chance, try a chef’s table dinner. It’s paced well since the table is only going to be used once a night, and the attention from the staff is incredible. They’re showing off their kitchen, letting you see where they work every day, so they’re pretty confident that things will be great. We were able to talk to Chef Nick, Damian, Kelly and other staff, and we thoroughly enjoyed the evening, with a special thanks to Tim and Lisa for hosting us for the evening, and the Coldwater Cafe staff for making a 3+ hour dinner fly by too fast! The food was great, the service was even better, and the food presentation was topnotch. With one minor exception… I’d like to see the chocolate syrup squiggles with the cheesecake go away… simpler is better, but that’s just me trying to find something to criticize.

What they’ve done at the cafe is just proof that small town restaurants can compete with bigger city restaurants. The best-rated restaurant in Kentucky, supposedly, is Heirloom, in Midway, a town about 20 minutes from Lexington, with a population of 1657. There’s less hustle and bustle, parking is easy and usually free, and you might find a gem that not everyone knows about yet. What do you do then? Tell everyone so they can enjoy it, too!