It’s almost here! Thanksgiving is an outdoor cook’s dream holiday. Instead of dealing with presents or trees or leprechauns or fireworks, Thanksgiving has a huge focus on food! So, in honor of the day where every dish matters, I’m doing a build up to the day itself.

In the next few days, I’ll dig into the bird, the sides, the desserts and even libations to go along with the day. And,with that, I’ll even be cooking a whole bird on Living Dayton on Tuesday, November 25, during the 12-1 show!

After the holiday, I’ll post my favorite leftovers. I’ve done most of them before, but they’re worth revisiting, I think.

The question to be considering first, though, is whether or not to brine your turkey. There are those that swear by it and those that don’t like it much. One friend of mine thinks it changes the texture of the turkey, in fact. My thoughts are that the brining can be overdone, but, by using a bit less salt, you still get the benefits of brining without the disadvantages.

The main advantages of brining are increased moisture content and added flavor. The moisture content is due to the salt in the brine actually penetrating the exterior of the meat. As it penetrates, whatever liquid its in also goes with it. This is also how flavor is added… If the liquid has added flavor, that flavor goes into the meat, too.

I like to use about 3/4 cup of kosher salt per gallon of water to brine. How many gallons are needed? It depends on the bird size and the size of the container in which it’s going to be brined. First, it must be a food-safe container. This means no Home Depot buckets! Ok, I did this once before realizing that it has to be food-safe, but this is actually easy to do, even with a Home Depot five gallon bucket. Just put the bird in a brining bag from the grocery, and then put it in the bucket with ice water around the bag. Simple! To figure out how much water is needed, the turkey goes into the container, still in its plastic, and water gets added until the turkey is covered. Take the bird out and pour the water out to measure it. Figure out how many gallons there are and multiple that by 3/4 cup to get the amount of salt needed. That’s all there is to it!

The salt just needs to be dissolved into the water by stirring it for a few minutes. Once it’s dissolved, other flavors can be added. My favorites include either coffee and molasses, or herbs, turbinado sugar and bourbon. For Thanksgiving, I usually opt for the herbs, sugar and bourbon, though. I like to use sage and thyme for Thanksgiving turkey.  To the brine water, I put about 1/2 cup of bourbon per gallon in, along with 1/2 cup turbinado sugar, and handful of peppercorns, and several sprigs of both fresh thyme and fresh sage. The turkey just needs to be removed from its packaging and put into the brine, with lots of ice.

Ice is critical here, as the whole thing has to be kept under 40F. The bird is going to sit in the brine for 24 hours, so it has to be kept safe. When I brine, I check every once in a while to ensure the ice is still there, and brining in a cooler helps, as it can keep things cold a lot longer. If you use a bucket, that can be set in a cooler, too, with ice all around the sides, but the lid likely won’t close, and ice may need to be replenished more often.

Will the brine make the bird salty? Actually, no. It can make the skin salty, but turkey skin isn’t my favorite, anyway. When the turkey comes out of the brine, it should be really well rinsed to wash off any extra salt water. Just do everyone a favor and make sure you don’t splash on clean dishes to give someone salmonella!

I like to let the turkey rest for several hours or, even better, overnight, in the fridge with nothing over it to let the skin dry out a bit. Then, before starting to cook the turkey, I put it on the counter to let it warm up a bit, but I put bags of ice on over the breast. This keeps the breast cooler than the rest of the bird, and the whole turkey cooks more evenly instead of overcooking the dark meat to get the breast done. Let the bird sit this way for 30-45 minutes, then get it ready to go on the cooker. 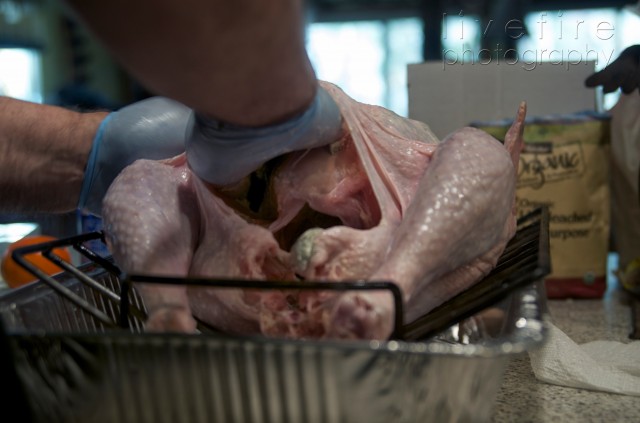 To prep the bird to cook it, I make a compound butter, using a whole stick of butter and fresh, chopped thyme and sage, along with black pepper. Just mix everything up with the room-temperature butter, and you have a compound butter! I like to put this under the skin, all over the meat, then add more herbs to the cavity of the bird. With that, I pepper the skin a bit and put it all on a 325F pre-heated cooker. I like to use lots of pecan wood;  I use a lot of wood because less is absorbed at higher temps, but I like the smoked flavor. It should take about 20 or so minutes per pound at this cooking temp, though that can vary. I start looking at the bird about half way through my estimated time; if the skin starts to darken too much, I put foil over the bird to keep the skin from darkening too much more.

Timing is great as a baseline for when the turkey will be done, but the real objective is to get the internal temperature to 165F. If it takes longer, that’s ok, but make sure it is cooked! I check both the breast and the thickest part of the thigh. Once you get to that, the bird comes off, and, after a 15 minute rest, it’s ready to carve and serve! 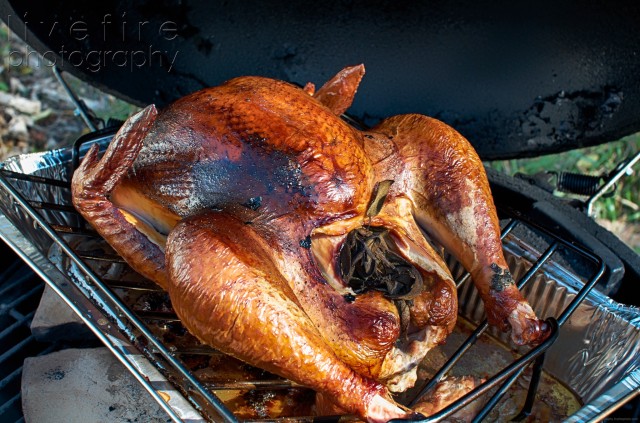 Next up will be side dishes for Thanksgiving dinner!