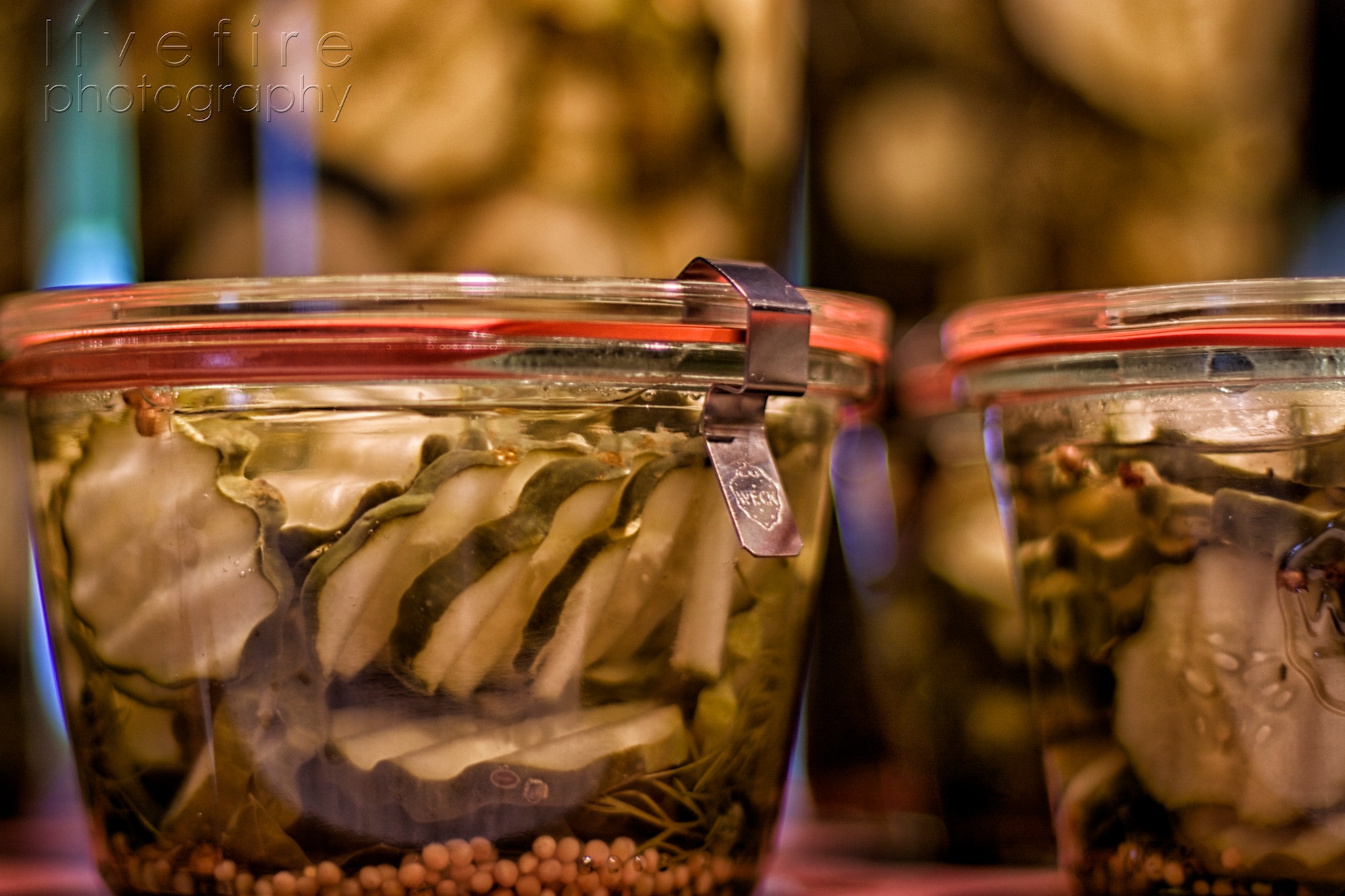 No grilling today, but I have wanted to try my hand at something new – pickling! If you’ve read much here, though, you might guess that I’m not just doing regular old pickles. I have had some Brooklyn Brining Company’s whiskey-related pickles, and found a recipe trying to duplicate that on Cupcake Rehab. I had to make some changes, though. The recipe calls for a bit of maple bourbon, but I used Maguey Sweet Sap and Larceny bourbon for some, with Jefferson rye and Woodford bitters instead of the bourbon in some of the pickles. I also swapped chipotle flakes for red pepper flakes. I also did a couple small jars of non-boozy pickles, just as a control group, of course. The process is a lot simpler than I expected. I did water-bath processing to ensure the pickles will keep. This isn’t hard at all, but it will heat up the kitchen a bit! All it means is 10 minutes in boiling water, then the pickles should keep, unrefrigerated, for a year or so. Pretty cool, huh? I got started with the pickles by stopping by a farmers market on Friday, getting several pounds of organic pickle cucumbers from a local farm, picked that day. There’s a small farm in the Dayton area called Patchwork Gardens that are putting out organic produce, working toward year-round fresh veggies. The guys are great, work hard to offer quality, fresh, sustainable produce, and they even like whiskey! The rest of the ingredients were pretty each to come by, too: garlic (also picked up at the farmers market), fresh dill, pickling spices, small-grain sea salt and mustard seeds. The process is important, as canning means pH levels have to be right, and everything has to seal to ensure it’s airtight, or bad things are going to grow in the jars. The first thing to do is sterilize the jars being used by boiling them, submerged in filtered water for a few minutes, along with the lids. I used Weck jars, so the lids are glass with rubber gaskets instead of the metal lids with the rings that twist on for Mason or Ball jars. The lids on Weck jars clip on, but the clips don’t have to be sterilized at all. While the jars are being sterilized, the vinegar, water and salt are boiled, and, as soon as the jars come out of the hot water (carefully), the other ingredients go in the bottom of the jar, with the cucumbers tightly packed on top of everything. The ingredient amounts were based on the size of the jars; the recipe was for pint jars, and the jars I used were that size as well as smaller and larger. I also added the bourbon to some of the jars (about 2 ounces per pint), and rye whiskey with bitters to others (same proportion). Once the cucumbers, which I sliced up with a crinkle cutter, were packed on top, a bit of Maguey Sweet Sap was added, about 1 teaspoon per pint, then the boiling vinegar mixture went in, filling to the top minus just a bit of space. That’s most of the process, other than sealing the lids and placing the jars in boiling water, most of the way up the jars. When the jars go in, the water has to come to a boil again, then the jars sit for 10 minutes. There should be some bubbling inside the jars by the end of the 10 minutes. The jars set out then, and they should seal within a few minutes. With the metal-top canning jars, you’ll hear the jars seal. With Weck jars, the tab on the rubber ring starts to point downward a bit. In a week, they should be ready to sample. Until then, the flavors won’t really mix as much as they need to, but I’ll see how my first try at pickling went soon! 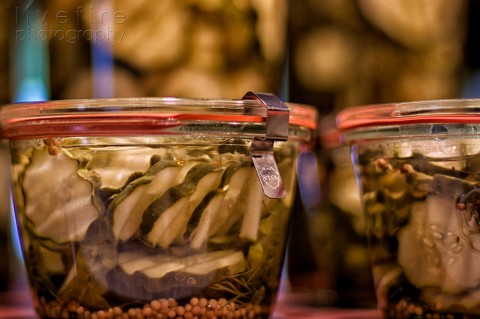