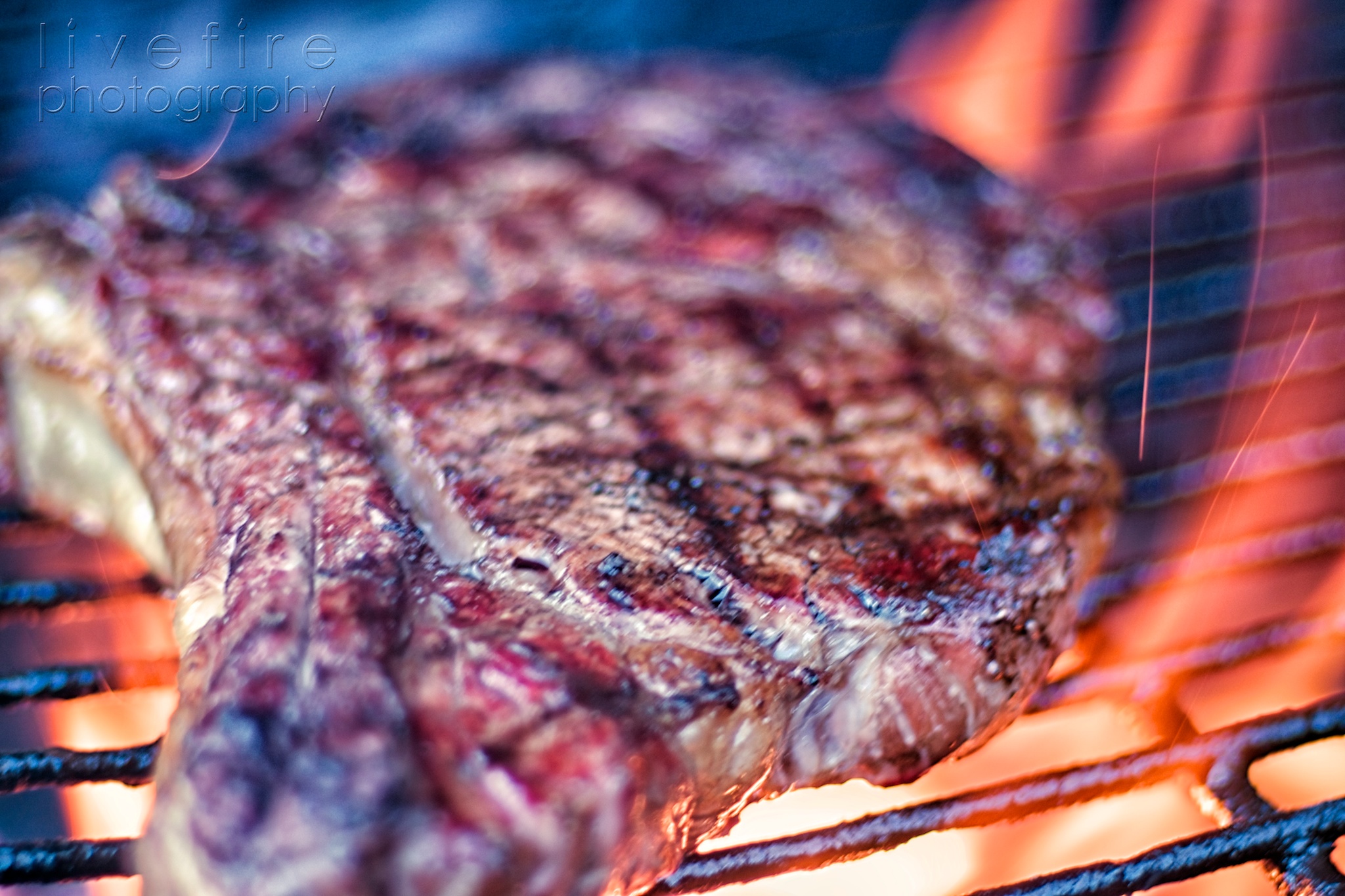 The 5th Livefire Steak Of Summer is the simplest so far, and one of the best, a straightforward salt and pepper ribeye from Food and Wine! It’s one of my favorite steak preparations, especially for a prime-grade hunk of ribeye.

For a good steak, there’s nothing like just a bit of salt and a bit of black pepper. Some would say to add the pepper at the end of the cooking, as pepper can burn. I didn’t notice a burned flavor at all, but maybe I should to a head-to-head! Along with the steak. the recipe calls for rosemary potatoes. I did that, but with browned butter added. Anne Burrell has a saying we like here – “Brown food good”, and browned butter has to be near the top of the list of brown foods that are more than good! I also had wanted to try baby bok choy, so I added that to the meal, too. Then I topped off the meal with Jeni’s Splendid Ice Creams Ndali Estate vanilla, topped with bourbon-soaked, grilled bing cherries.

The steak couldn’t be easier. Find a good butcher or meat department that has all-natural meats, and get a nice, thick, prime-grade bone-in ribeye. With that, you’re most of the way there! If you can’t find prime grade, that’s ok. An hour before grilling, put the steak out and cover each side with about 1/2 teaspoon of salt and let it rest. Just before grilling, rinse it off well, patting it as dry as possible, and you just tenderized the steak! About an hour before dinner time, start up the grill to a medium heat of about 450F. Fill a large pan with enough water to cover some baby potatoes (about 3 small potatoes per person, maybe 5 if they’re fingerling potatoes), and heat the water to a boil. Clean the baby potatoes by scrubbing under running water and add to the water once it’s boiling. After the water returns to a boil, set a timer for 8 minutes, then remove the potatoes. Since these are going right onto a grill, I don’t generally douse the potatoes into an ice bath for baby potatoes, but I do for fingerling potatoes. This stops them from continuing to cook by quickly bringing the temperature down. It also allows you to do this step up to a day ahead of time to save a bit of time at dinner, especially if you do it when I did, after work one evening, so you don’t end up eating at 8:30, like we did! The bok choy is super easy. I just cut it in half, top-to-bottom, and drizzled lightly with canola oil, spreading the oil evenly over the baby cabbages. That’s all the prep I did for the cabbages before grilling, can’t be simpler!

Put the potatoes in a large bowl and add a couple tablespoons of olive oil, rolling the potatoes to coat, then add fresh chopped rosemary. The potatoes go on the grill first, directly over the heat of the grill heated to 450F. They take about 8 minutes a side to brown nicely. The goal here is to get a nice grill look to them; that just adds great live fire flavor! Turn the potatoes once, then brown the butter. I use salted butter, and put about 1/4 stick in a small saucepan, then melt it over medium heat on the stove or side burner of a gas grill. The butter will melt, then bubble and foam, then settle down a bit, then foam again. That second foam is important… Watch the butter’s color; when it turns from a light yellow to brown, move the pan a bit to keep the butter moving in the pan, and let it brown just a bit, until there’s a nutty aroma from the butter, then immediately remove it from the heat and set it aside. You’ve now browned butter, and, trust me, you’ll be doing it again! The steaks should be prepped already, or, if you salt-brined them, rinsed, dried and peppered right away. At this time, move the potatoes to a cooler part of the grill, away from the direct heat, and add the steak over the direct heat, along with the bok choy. I found the cabbage doesn’t cook much faster than the steak, so leteverything over the fire go for about 4 minutes before turning, then another 4 minutes. The cabbage should have some leave that char a bit, and the cabbage will be softened, and, hopefully, have some nice grill marks. Remove the potatoes and bok choy and place in a warm oven or just cover with foil. Now is the fun part. Take the steak off (ideal internal temp for this is about 100F) and set it on aside but not too far from the grill, then crank that grill up! I did this on a Big Green Egg, and got the fire up over 650F. Carefully open the grill. Burp it, if it’s a BGE, so you don’t get a flame hitting your hands. Put the steak right over the fire. It’s hot, so be careful! Let the steak sizzle right over that major heat for about a minute, the flip and repeat! This is so hot that you’re not really going to see grill marks as much as just crusting the whole side of the steak. You’ve now done a reverse sear on the steak, and you may never go back to the old sear-first-then-cook method of steak grilling! That steak is brown, crusty, and incredible! It’s also, hopefully about 125F internal temp, and should rest under foil for about 5 minutes or so before slicing. While the steak is resting, pour the brown butter over the potatoes and add a bit of large-grain sea salt (such as Fleur de Sel). Serving is simple… Slice the steak off the bone, then slice it into strips about 1/2″ thick, serving 3-4 slices per person. Add 1-2 bok choy halves, drizzled with balsamic reduction and sprinkled with sea salt. Add a few potatoes, and you can even add a bit of the butter to a ramekin to serve on the side. The cherries actually got started before the rest of dinner. I got the idea for the grilled cherries from Ashley at Edible Perspective. Adding the bourbon and actually grilling them on the BGE (instead of roasting in the oven) were my idea. I halved and pitted the cherries, then poured about 1/4″ cup of Larceny bourbon over them in a bowl, stirring now and then. After about 2 hours worth of soaking, the cherries went onto a grill pan on the BGE, turning every few minutes, until the cherries starting to char and give out a great bourbon-y/cherry-y aroma. The halves went right on top of Jeni’s vanilla ice cream. The heat melted the ice cream nicely, and the combo was just great. I’m not usually a fan of cherries, but these were great! I’d even use them for pies, pureed into a sauce for pork or in a Manhattan!