More steak for us, yea! As I continue the Steaks of Summer this year, I was in the mood for flank steak. The Food & Wine recipes that have inspired my Steaks of Summer had a great sounding marinade using yet more balsamic vinegar, but this time doing a marinade with garlic added and a bit of mustard.

But first, it was the Fourth of July, too, which, for us, means backyard fireworks with friends. We went to their place for grilled turkey, zucchini, some great potatoes, and grilled pound cake with macerated berries and pastry cream. Now, when I say backyard fireworks, these are unlike any I’ve seen before. This has become something of a tradition for us, and it makes a great 4th of July!

But on to the steak, since I know that what you’re here for!

The marinade is really simple, with olive oil, balsamic vinegar, garlic, stone ground mustard and salt and pepper. Starting with the balsamic vinegar, mustard and a couple of sliced cloves of garlic, the oil is drizzled into the blender to emulsify it, adding salt and pepper to taste at the end. It only takes a minute, and it’s good stuff! this can actually be used on salad, in fact, but makes a pretty good marinade and sauce.

Taking a flank steak, place it in a shallow dish so it lays flat, then cover with the marinade, keeping about 1/4 cup of the marinade for later. Coat both sides, cover with plastic wrap and refrigerate for up to 24 hours. The longer, the more flavor is imparted.

Instead of the salad in the original recipe, I added some Brussels sprouts and locally grown fingerling potatoes, all grilled. The potatoes were cleaned and coated with a small amount of olive oil, then put into a grill pan so they’d take on some good grill char, then put on the grate over a 500 degree fire. The potatoes have to be turned now and then to ensure they don’t burn, but they’ll take about 45 minutes (less if they’re smaller).

The brussels sprouts were cleaned and halved, with salt and pepper and some more balsamic vinegar added (about 4 tablespoons), and sea salt and pepper. Into a Dutch oven, and onto a 350 degree grill, set up for indirect heat (no heat under the pan). Why is it a “Dutch” oven? Are Dutch people cheap? They won’t put in ovens, but choose to cook in a large pan instead? I mean, going Dutch is just splitting the check, right? If I were Dutch, I’d petition to change that image! Anyway, it will take about 30 minutes for the Brussels sprouts. During the last 10 minutes of cooking the potatoes, the steak can be grilled. Don’t remove all the marinade, just let it drip off a bit. Then put it over a medium fire for about 4 minutes a side,  until it reaches an internal temp of 125F. Remove the steak and let it rest for 5 minutes for slicing it against the grain in thin slices.

While the steak rests, put a quarter stick of butter in a small sauce pan and melt it. Let the butter foam a bit, and, as it finished foaming, it will brown. As soon as the brown-ness starts showing, it’s done; if it goes too far, it will burn. Then drizzle it over the potatoes in a large bowl, getting that browned butter goodness spread around! Add a bit of large-grain sea salt (fleur de sel, etc.), and you will love these potatoes! All that’s needed is to put some steak, some Brussels sprouts and some potatoes on a plate, adding a bit more marinade to the steak, and a nice glass of wine, and dinner has to be great! Oh, but we’re not done… Dessert is called for, especially since figs are again in season and fresh. About 2 hours before dinner, the glaze is made for the dessert. This is easy… 1 cup of Maguey Sweet Sap or light molasses and 1/4 cup bourbon go into a sauce pan over a low fire until simmering, then simmered for a couple of hours until the glaze is thick and syrupy. Then, after dinner, taking a half-dozen figs and wrapping them each with half a slice of bacon, put them on the grill over a medium fire, being sure to get the bacon crispy without burning it. This will take about 10 minutes, turning the figs frequently. Add three figs to a small bowl of vanilla ice cream and drizzle with the bourbon glaze. You’re welcome. 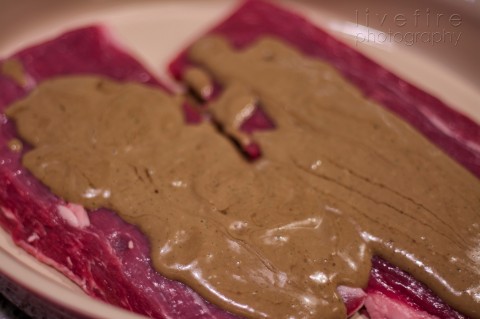