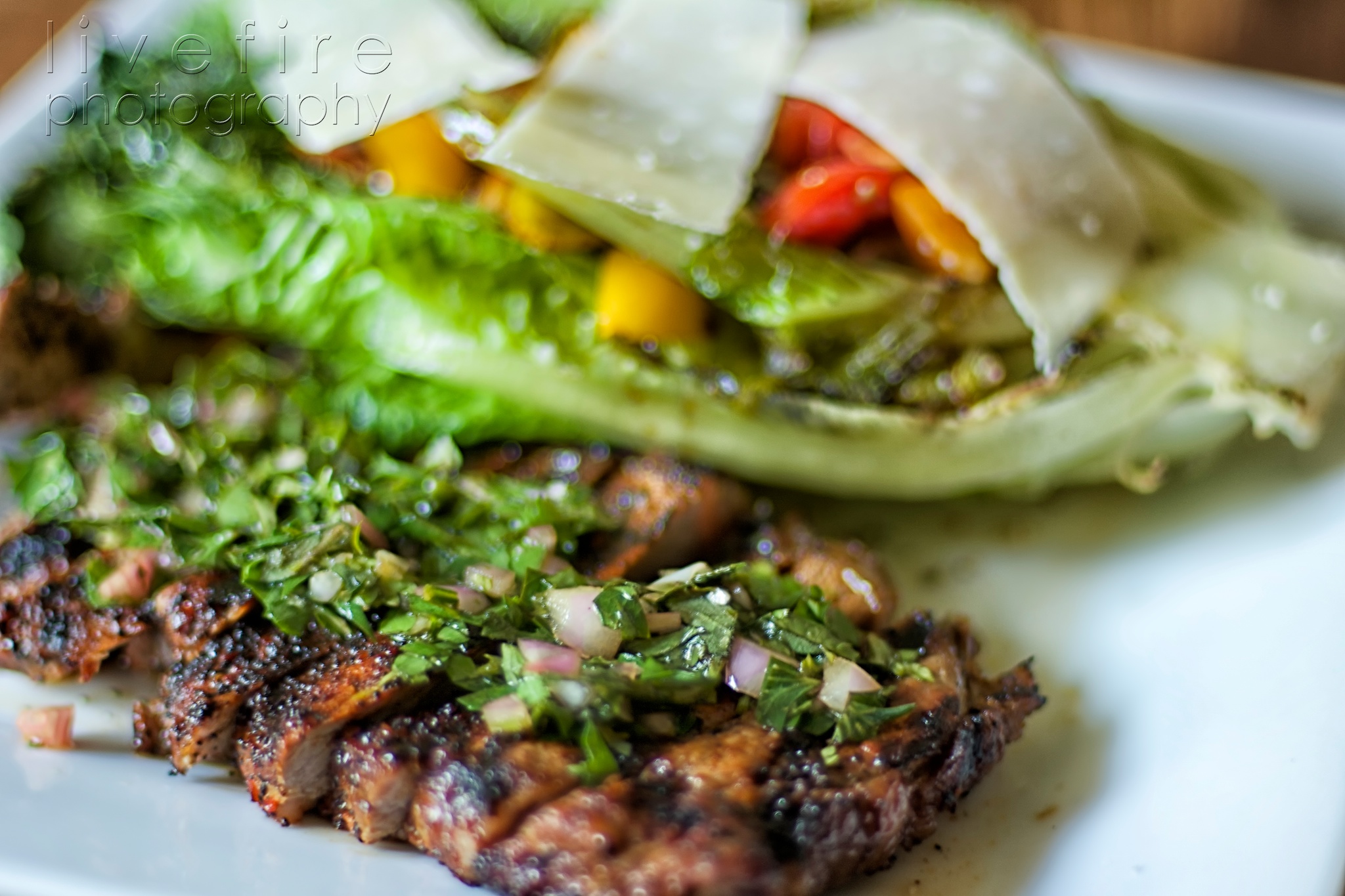 In doing Livefire’s Steaks Of Summer, based on Food & Wine’s Steaks slideshow, I chose one that used steaks I already had, New York Strip steaks, and a recipe I knew would be great, coffee-rubbed strip steaks with chimichurri. Afterall, I like coffee, I like strip steaks and I like chimichurri! And, I’m guessing, if you’re here reading this, you’re a steak fan, too. To paraphrase from Ron Burgundy, “I love steak. Steaky, steak, steak. Here it goes down, down into my belly…”

Chimichurri, for those that haven’t had it, is an Argentinian herb mixture that goes great with all kinds of things. It’s parsley, cilantro, some acid (vinegar or citrus), garlic or shallots, and completely delicious! Since this is my website, and I was doing the cooking, I made the Livefire version of Food & Wine’s steak.

The recipe calls for a salad that’s pretty much a chimichurri salad (same ingredients, just not chopped up as much). Instead, I went for a grilled Romaine salad, and I wanted heirloom cherry tomatoes and Parmesan Reggiano on it. To tie this in with the steak, I used an espresso infused balsamic vinegar, too.

My variation on the chimichurri was to make it fit the salad a bit more. The recipe calls for red wine and sherry vinegars. I used red wine and white balsamic vinegar instead, and it worked just great; I changed the amounts of cilantro and parsley a bit, too. I also changed the rub a bit by substituting brown sugar with Maguey Sweet Sap, and I used Aleppo chiles instead of chili powder. Other than that, I followed the recipe… mostly.

The chimichurri is really easy to make, and all that’s needed is a sharp knife, a cutting board, a measuring cup and measuring spoons, and a whisk. First, the sweet sap is measured out into a bowl, then the vinegars (1/4 cup each) and 2 tablepoons of olive oil are whisked briefly. A medium shallot is chopped and added, along with 2 tablespoons or so of fresh oregano (chopped), 1/2 cup of fresh, chopped cilatnro, and a cup or so of freshly chopped flat-leaf parsley. Some sea salt and black pepper are added at the end, then. I did make one more change to the recipe, more for visual effect than anything else. Before adding the salt and pepper, I chopped up a few chive flowers and added those instead of chive stalks.

The texture can be left coarse, or the herbs can be more finely chopped. I prefer coarse chimichurri, but I’ll take any that’s fresh!

The rub was quick and easy, with 2 tablespoons each of ground espresso beans, smoked paprika and turbinado sugar, 1 tablespoon of dried and ground Aleppo chile and coarse sea salt, and some black pepper to taste. The original recipe called for cumin, too, but, since my wife doesn’t care for it, I omitted it. 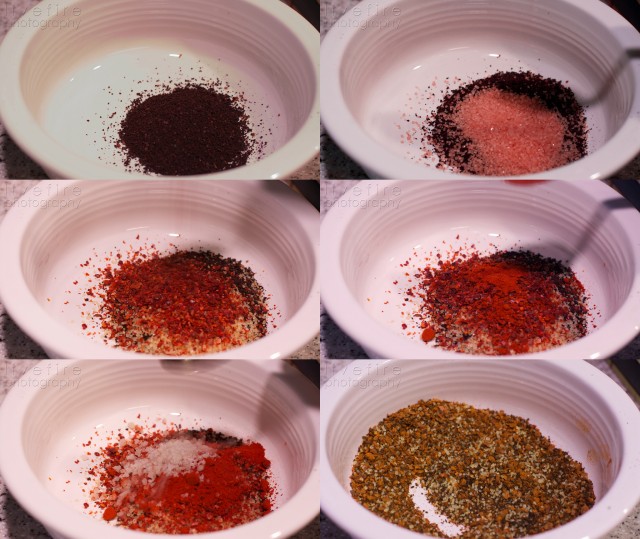 I let the steaks rest after removing from the fridge, with the rub on them, for about 30 minutes, then put them on a medium-hot grill for about 3 minutes per side, to an internal temperature of 120, then they rested for 10 minutes while I grilled a head of Romaine lettuce (cut in half top to bottom). The grilled lettuce was drizzled with a bit of olive oil before grilling, and taken off just as it started to wilt/char the lettuce a bit, then topped with the cherry tomato mixture. The steaks were cut on the bias and topped with chimichurri (or it can be served on the side). The perfect beverage for this has to be an Argentinian Malbec… it’s inexpensive, big, red and delicious! 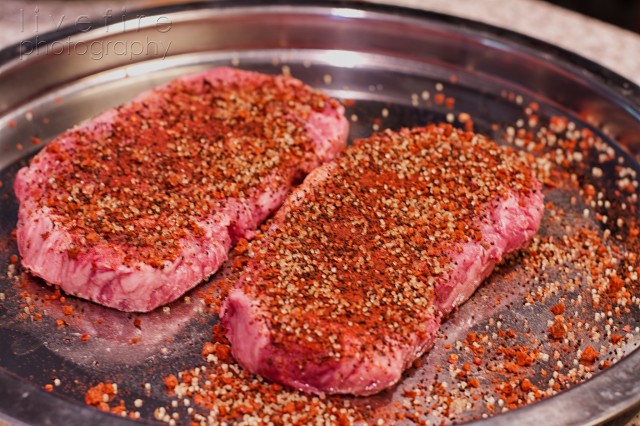 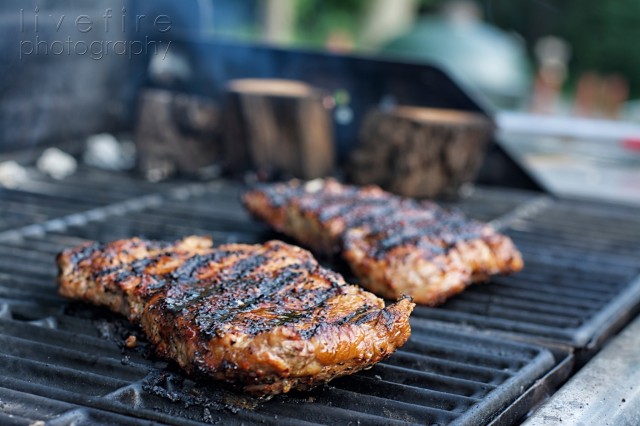 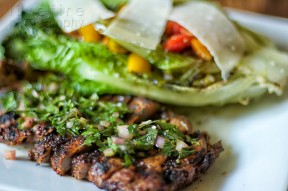