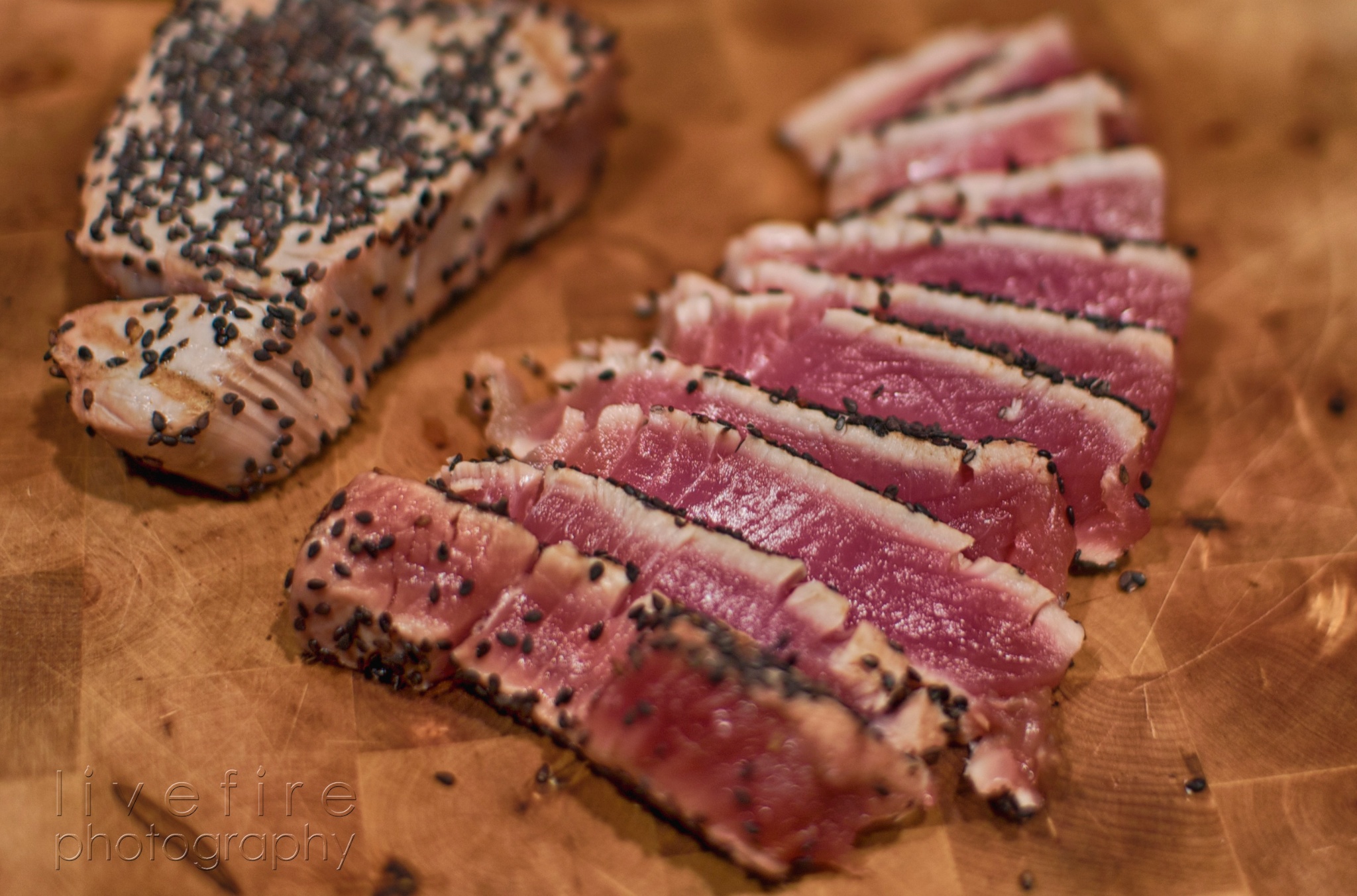 By now, we’ve all done the wings and nachos and dips, maybe even pulled pork sandwiches. But it’s 2014, and it’s time to raise the bar!

First, though, I have some new intentions for 2014. The more I read, the more I’m moving to the side that organic is better than not organic. Our bodies want to hold too much bad stuff when we eat bad stuff. The old adage “you are what you eat” really is true. If we eat chemicals, our bodies keep those chemicals inside. If we don’t, there isn’t so much bad to keep in. I’m trying to eat better, but not stop grilling and smoking at all. I’m not going vegan, so don’t worry! What you will see sneaking into my cooking will be:

I hope you stick around while I learn how to grill healthier than ever. But on to the Superbowl eats!

This is a simple way to really wow people at any Superbowl party… Feed them tuna! Yes, tuna! But not just any tuna… Charcoal-seared tuna! We’re going for simple but great food here, and charcoal-seared tuna works fantastically for this! The trick is to get sushi-grade tuna and a hot wood/charcoal fire. A couple ways to get the fire hot are to just crank up a Big Green Egg all the way or to put a grate over a half-full chimney of charcoal that’s glowing red.

To idea here is to take a great piece of tuna or two and grill it so fast that only the outside edges get a bit of a char to them. I took a hint from a Good Eats episode years ago and coated each side with black sesame seeds. They act as something of a timer for grilling… pretty cool! While the tuna sits to come to room temperature, the grill gets heated. In a Big Green Egg, a chimney of charcoal is fired up until it’s hot, then dumped into the BGE, with dampers and vents opened wide. It will take only a few minutes to bring the grill up to high temperature, so this is done about 15 minutes after the tuna is set out. On a chimney, the same chimney is filled only half way (or less) with charcoal, and it’s lit about 20 minutes after the tuna is set out and allowed to get as hot as it can. A small grate can be set on top of the chimney, and it becomes a very hot little grill! Either way, the tuna is then put on the grate right over the high heat fire. Starting a timer, make note of when the sesame seeds start popping, then turn the tuna over and time the same amount of time. This is only going to be about 30-45 second most likely! Once both sides are grilled the same amount of time, remove the tuna from the grill and let it rest for a few minutes, then slice and serve. I like to serve it with some soy sauce and wasabi, but hoisin sauce can also be used, or a soy sauce/honey mixture.

When the tuna is sliced, the inside will still be raw (hence the need for sushi-grade!). It’s just too good to not make this stuff!

Serve this for Sunday’s game, and your fellow-partiers will love it! If they’re not willing to try the tuna, you’ll be blessed with more for yourself… but try to get them to give it a taste!