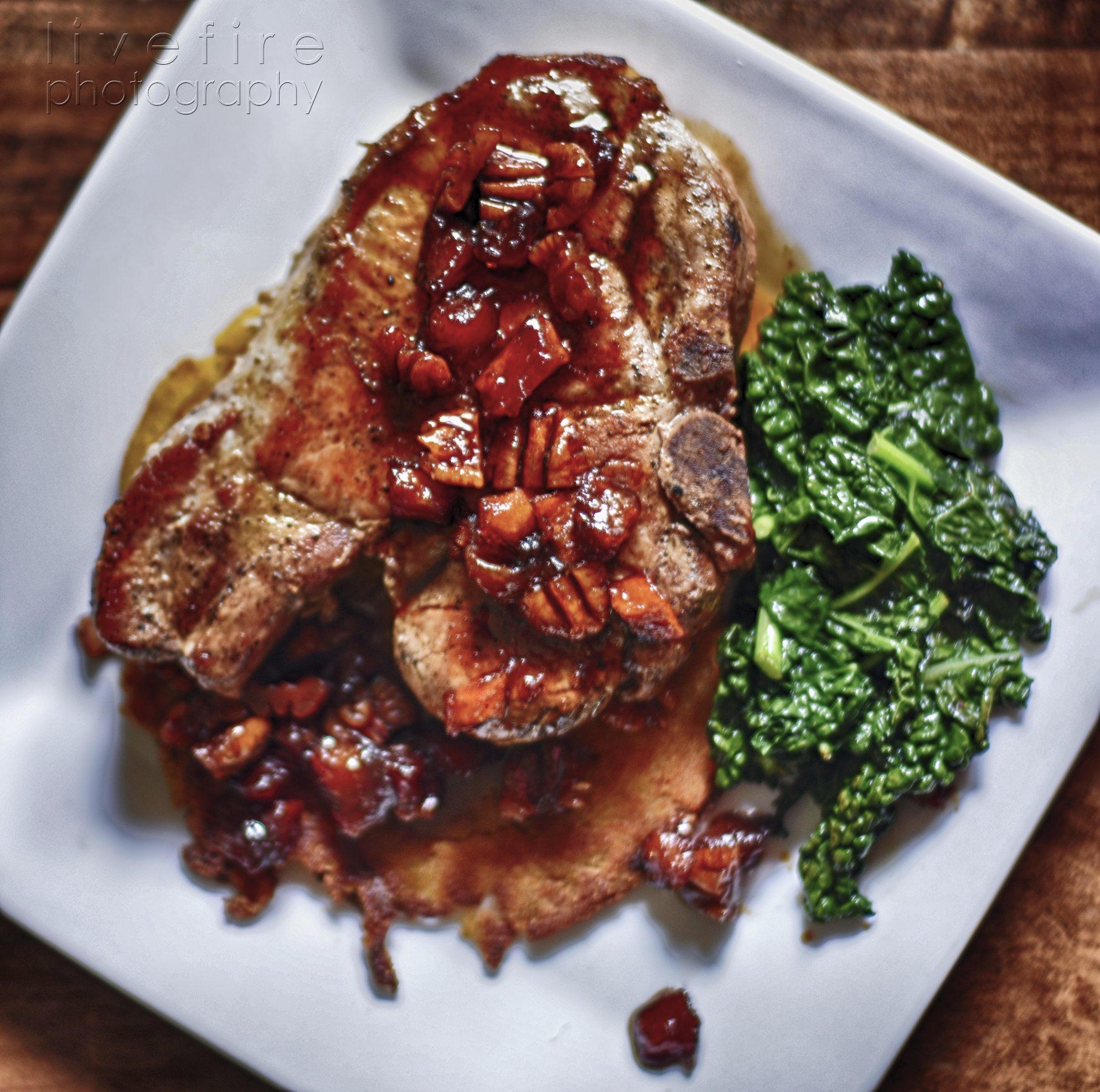 A Culinary Ode To The South

After getting back from our recent trip to the South, I had really wanted to try to keep the spirit of our vacation going. As long as I can. No matter how hard it can be.

To do this, I decided to use my stomach. Or maybe I should say my tastebuds. Yeah, that sounds much better! I had a great condiment in Savannah which I did my recreation of here. I thought a whole-meal approach was needed, so I built on the compote by adding the rest of the meal. It’s kind of backward, but, as you’ll see, it works just fine! I have to admit that as nice as the south is in April, I would die in no time if I lived there. The food is ridiculously good, and, often, ridiculously bad for me. And it’s too hot in the summer!

If you didn’t click above to see the compote recipe on Livefire Whisky, it’s basically a bourbon syrup with Maguey’s Sweet Sap, apple, pecan and cinnamon. In fact, that’s all that’s in it, for version 1.0. To lay out the culinary palette for this compote (man, does that sound pretentious, or what???), I decided on heirloom pork chops with corn cakes and kale. The whole thing sounds to me like, to borrow from my friend Catherine, the South in my mouth! The pork chops were simply seasoned with kosher salt and fresh black pepper, then grilled to about 145 degrees F. on my Char-Broil TruInfrared grill. The corn cakes were a simple combination of ingredients that started their frying on an oak plank on the grill, but a thunderstorm took this inside to finish on the stove, and the kale was done with a simple saute in a touch of butter with salt and pepper.

The corn cakes seemed a bit dry, actually, but the compote remedied that easily. The recipe I used was made up after reading several I didn’t want to try:

Author: Curt McAdams
Cuisine: Southern
Recipe type: Side Dish
Serves: 2
Prep time:  10 mins
Cook time:  6 mins
Total time:  16 mins
Ingredients
Instructions
3.2.1230
The kale was even easier; I washed it anc chopped it, then added it to a medium-hot skillet with 1 tablespoon butter, turning quickly to coat the kale. Salt is added, and the kale is turned frequently until just tender (about 4-5 minutes). The pork chops were the simplest… After adding salt and pepper, the chops were put on a hot grate on the Char-Broil TruInfrared, turning after 6 minutes (thick cut chops). Once the internal temp was at 145, the chops were removed and covered for 5 minutes with foil to rest. To do this again, I would add a bit of sour cream or Greek yogurt to the corncakes (maybe 1/4 cup), and a whole sereno chile.

The verdict was that I successfully extended my mental state of being in the South, right at my house in Ohio! If you do noting else, head over to my other site and try that compote!