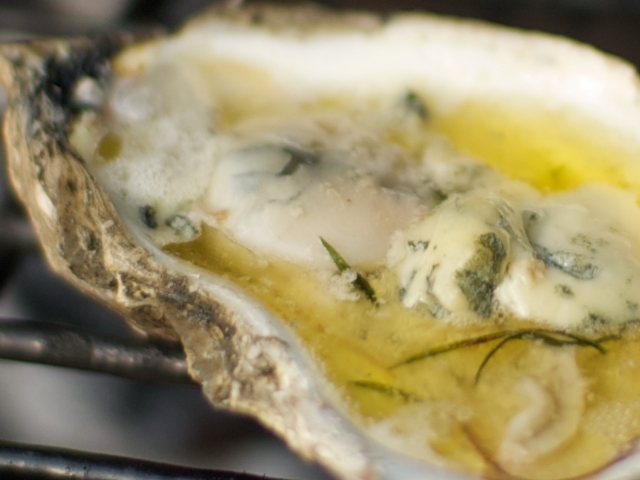 My wife and I were at a new-to-the-area market yesterday called Earth Fare. For the most part, I prefer Dorothy Lane Market, but Earth Fare does have a great salad bar. It’s just a bit too health-foody for me, I guess. Anyway, they have lots of bulk tofu and bark and seeds and hippy stuff, but also have nice seafood, wine and deli departments. They just happened to have oysters in the shell, so I picked up a few of them to try on the grill.

I don’t typically grill oysters, as my wife doesn’t care for them much, but I thought it would be fun to try something out… When I told her what I was doing, she wanted no part of it, anyway! I decided to try something out with whisky, as I keep looking for ways to incorporate whisky into different foods. So I was already ensuring that my wife wasn’t going to be a part of my little experiment. I then threw in some bleu cheese, clinching the deal… These were all for me.

To start things off, I got my Big Green Egg fired up with a 2 zone fire (hot on one side, no coals on the other). This can only be done on an XL, as the firebox on smaller BGEs is not large enough. I was going to actually try this on the Infrared, but a very small mouse decided to try out the grate as a summer cottage. I discouraged that by adding a lot of heat (with the mouse gone), but I want to be sure he’s found other living quarters prior to firing that up to cook on it! As the BGE was warming up, I melted some butter in a sauce pan, browning it a bit, then added some Ardbeg 10-year-old whisky and a bit of fresh tarragon and salt and pepper. The oysters went over the hot part of the grill for about 2 minutes, just until the shells started to open. I’m daring and all, but I don’t own a shucking knife, and I didn’t want to chance gouging my hand opening up oysters with a screwdriver or paring knife. Once the shells opened a bit, it was easy to remove the flat half of the shell. The oysters went back onto the grill, but this time I placed them away from the direct heat. I added the butter/whisky/tarragon, then topped them with some bleu d’Aurvergne cheese, a really creamy bleu cheese. I closed the lid and let them oysters cook in the butter and whisky for about 5 minutes, then removed them when the edges of the butter started browning on the shell a bit. The oysters went right to the table for me to try. The verdict? I think my plate says it all… I will warn that these are pretty strong flavors. If you aren’t into peaty whisky or bleu cheese, you can swap a lighter version of each. I might try something like Old Pulteney or Highland Park, or even a Glenmorangie, and smoked gouda might be a nice addition for the cheese. In my book, though, I really liked the in-your-face flavors; each oyster is a small bite of big tastes, and worth grilling again! I love experiments that turn out to be keepers. I do want to try some other grilled oysters to come up with an oyster medley… Any suggestions?

A couple side notes… I “typed” this up on my new Xyboard tablet (thanks to Verizon Wireless), using a stylus with handwriting recognition instead of a keyboard. I really like the way this works, and the word recognition is really strong. This is a great way of writing on a tablet that I find easier than screen-typing on a keyboard. Another item: I added a recipe plug in to allow printing of recipes. Let me know what you think.

Author: Curt McAdams
Recipe type: Seafood Appetizer
Serves: 2-3
Prep time:  5 mins
Cook time:  8 mins
Total time:  13 mins
Ingredients
Instructions
Notes
I like peaty whiskies, so I used Ardbeg. Highland Park or Old Pulteney would also work well. An alternative to Ardbeg that's cheaper and still very good is Black Bottle blended whisky. Instead of bleu cheese (I used d'Aurvergne), a milder cheese can be used, also, such as gouda or a mild cheddar. Instead of tarragon, a dash of hot sauce can be added.
2.2.8