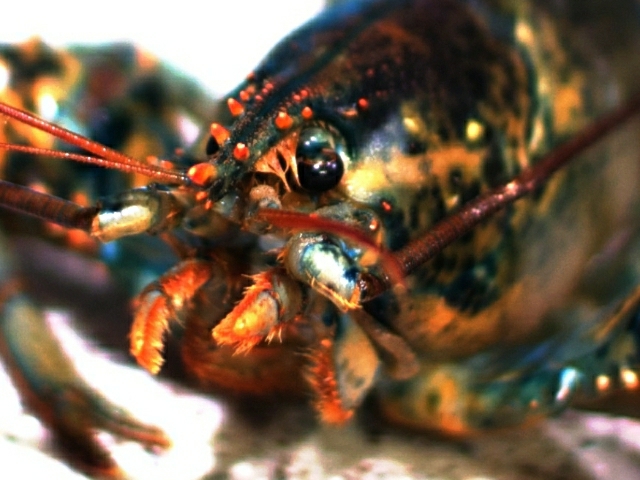 Memorial Day brings one of our favorite events each year… Dorothy Lane Market’s Lobstermania. I don’t know how long Lobstermania has been going on, but it brings to Dayton, Ohio, lobsters about as fresh as possible. Two brothers in Maine that are lobster captains catch all they can the day before, then fly with the lobsters to Dayton to sell them on Saturday morning. And the price was still only $11.99 for 1 1/4 to 1 1/2 pounders! The lobsters start going out the door at 9 am, but we were there early, so I could be first in line! The line was probably about 50 yards long by the time we left, with more people still coming in, and they were sold out by about 1:00 pm. The people in line are always fun, and Dorothy Lane Market supplied wine, juice and snack samples while people waited. And to prepare for the event, I had on my lobster shorts… We got a bunch of lobsters, with plans to make lobster rolls with some and to boil a couple for dinner for the two of us. The great thing about how Dorothy Lane Market does this is that, as we left the store, lobsters were being boiled and put on ice right outside, and we were able to just swap 8 of our lobsters for 8 that were all ready to be made into lobster rolls! We took 2 of the little guys home for dinner that night, too, and let them out on the counter before taking a pre-dinner bath. And MacGregor thought they looked like a lot of fun… The two lobsters went for a bit of a swim… Little did they know it would be their last! Well, their next-to-last; their last was to swim in butter! Since these were about 1 1/2 pound lobsters, they went into the water for about 11 minutes (timed from when they were put into the boiling water, not from when it started boiling again). And we had a really good bottle of French Viognier to go with the lobsters. The other lobsters were for some friends to enjoy with us, as lobster rolls. These were done simply, as simple is best for a lobster roll, in my opinion. The lobster meat was removed and cut into chunks, and about a tablespoon of mayo was added, with salt and pepper. The buns were simple New England style coney rolls, toasted, and the lobster meat was added. There’s nothing more that needs to be done with good lobster. Forget the celery seed, the herbs, the extra stuff. And we had a really great, fresh blueberry salad from the Bar Harbor website, with some fresh strawberries. It was a great side for the lobster rolls! We had a lot of lobster that weekend, but I can’t wait until next year’s Lobstermania!