Getting Ready for Foie Gras

My wife and I are having our annual wine party in just less than 2 weeks, on October 27th. I always pick a theme for the wines, and each couple brings one red wine and one white wine that fits the theme. So far, we’ve done “Anything Goes” for the first 2 years, then “US Wines Not From California”, and “Southern Hemisphere Wines Not From Australia”. This year, I decided to go mainstream, and we’re doing “French Wines”.

We do the party a bit differently than I’m told I should do wine parties. Most of our friends aren’t that into wines, so we don’t do any formal scoring. I do hand out paper for note taking, and we discuss our impression of the wines’ color, bouquet, and taste. But there are too many people to do a standard tasting, which is fine with us. I think we’re expecting 20 this year, and most advice is to limit a wine tasting party to 8. This is about fun, not being perfect. What happens is that we all get to taste a lot of different wines, and different people like different ones. We get enough to want to go try one or two wines again later. One year, someone brought this awful wine that tasted like cherry cough syrup… At least to me, and a couple of others it did. Some of our friends, and I still call them friends even after this incident, actually LIKED it! Sometimes we have to give our friends leeway to have bad taste, even if it’s really bad! 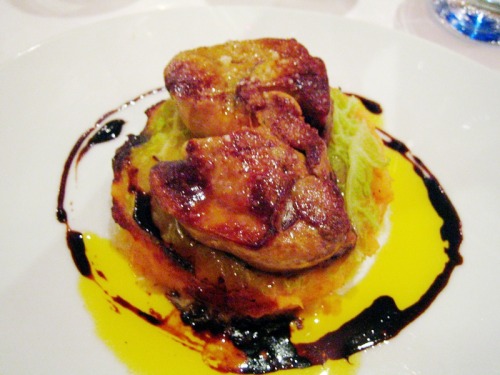 One of the things I like about this party is that all the food is made by me! People try to bring things, and I refuse any help. Any other party, that’s fine, but this one time each year, I get to decide on all the food. I try to do 2-3 meats, a couple of side dishes/appetizers and have several cheeses and bread. This year, I’ve decided to make pan seared foie gras.

I’ve thought about this a lot, as there’s a lot of controversy about this. The anti-foie gras group has a bunch of photos showing mangled birds from foie gras farms (though I never seem to find out from what farm the birds came). The thought of me personally being force fed grain/corn isn’t appealing at all. So I started doing some research.

For those of you that don’t know what foie gras is, it’s duck or goose liver. The ducks/geese are fed corn (and sometimes soy mixed in) through a tube feeder. This overfeeding takes advantage of a tendency for migratory birds to overfeed before migrating, which enlarges the liver to store fat. Fat=energy when flying, which probably takes a lot of energy! 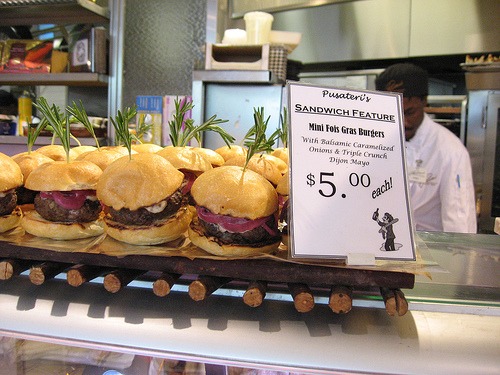 I’ve talked to some chefs about foie gras, but the problem there is that they aren’t involved in getting the foie gras to a restaurant. They just fix the dish. So I went to one of the US producers, D’Artagnan. There are very few foie gras producers in the US: Hudson Valley, D’Artagnan and Artisan Foie Gras. I know PeTA and other groups have anecdotal evidence of abuse, but I personally have long distrusted their motives. The AVMA (American Veterinary Association), however, says that there’s no evidence of abuse at D’Artagnan farms.

I’ve known several farmers in my life that raised livestock of one form or another. None of them did so with any cruelty. Were the animals treated the way I would want to be? No, but they are also different from me. Ducks and geese being force fed through a tube is not the same as you or me being force fed through a tube. Physiological differences exist, and the birds are made in such a way to accept the overfeeding. Do I think it’s fun for the bird? No, I don’t. I also don’t think it’s much fun for a steer to be castrated and later slaughtered. I don’t think it’s fun for a fish to be hooked and reeled in, then beheaded and gutted.

If I wanted to anthropomorphize animals, I’d probably be a vegan. Taken to an extreme, even plants that are harvested may feel pain. We don’t live in a pain free world, though, and I personally feel that I have canine teeth for a reason. God gave man dominion over the animals, and, basically, they’re ours to do with what we want.

The key to me is whether it’s done cruelly or humanely. I’ve taken a bit of time to get to know some of each side of this, and one side gives me shock value without a lot behind it. The other side talks to me sanely and shows proof of how they treat their birds. Not only that, but I’ve seen how farmers I know approach life in general.

Factory farming is a different thing altogether. I’m not talking about factory farmed birds; these are small farms that are more artisan farms than factory farms. I’ve had some great correspondence with people at the farms, and they’re either so evil that they can fool me into thinking otherwise, or they’re conscientious people that do something for a living they can be proud of doing. I know if I were guilty of what the antis accuse these farmers of doing, I wouldn’t be able to look at myself in a mirror, and I think the people I’ve talked with are the same.

I don’t know if I get enough readership to get many comments on this, but it won’t surprise me if I get blasted. If I do, I hope it’s backed with facts, not just emotion. Ducks aren’t people. That doesn’t mean that they should be treated badly. However, just because I wouldn’t want to be treated the way these ducks are treated doesn’t mean there is cruelty involved. I’ve seen other bloggers lambasted on foie gras posts, but I haven’t seen many bloggers actually take a side. I guess I’m officially saying I support the farmers in this. This “battle” reminds me a lot of PeTA and the “Humane” Society of the US (not to be confused with the American Humane Society or local groups) spreading a lot of false information about purebred dogs. Puppy farms are bad, true, and should be done away with. Purebred breeders overall are not bad and shouldn’t be done away with. The antis come up with a lot of misinformation or information about a very small percentage of what goes on, and they spread it around as though it’s true everywhere. How many protesters are meat eaters? Do not radical vegans hope to ban all eating of meat? My opinion is that foie gras is just low hanging fruit; what’s next?

I don’t know what French foie gras farms are like. I’m finding out that US farms, and D’Artagnan in particular, are run the way I would hope they were run, and by people that are proud of what they do.

I’m putting in my order for foie gras today.